Twilight Zone: "Nothing In the Dark"

"You see. No shock. No engulfment. No tearing asunder. What you feared would come like an explosion is like a whisper. What you thought was the end is the beginning." 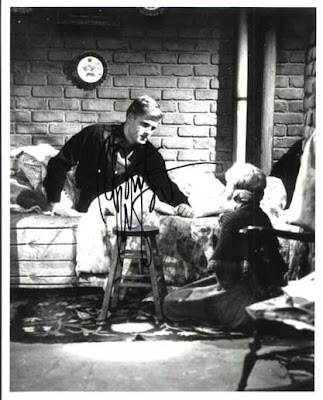 photo from the twilight zone museum
Of all the Twilight Zone episodes, this is my very favorite. I become so absorbed in the acting of both Gladys Cooper and a very young Robert Redford, that I actually get tingles. I get TINGLES all over. Gladys plays the part of Wanda Dunn. She is old and absolutely horrified at the prospect of death. She has kept herself locked away in an old tenement house for years, forgotten by everyone but a grocery delivery boy whom she leaves a list and money for every week. Gladys plays the part of Wanda in such a way that you can actually feel her terror and empathize with her fear of dying. You can't help but want to reach out to her and cradle her in your arms...am I a wacko because I get so into old twilight zone episodes? I don't think so, I'm not the only one who appreciates them and the wonderful legacy Rod Serling left behind for us. Anyhow..
Wanda is alone as usual and suddenly she hears a gunshot and a police whistle. Startled and frightened by the noise she carefully peers out the door and sees a handsome young police officer (Robert Redford) lying on the cold ground in the lightly falling snow. He calls out to Wanda and begs her to help. He tells her he has been shot and that unless she helps him he will bleed to death and die. Wanda is terribly afraid to venture outside the safety of her apartment and explains that she knows he is trying to trick her, that she just can't help him. She has not removed the chain lock from the door and tells him she will close the door if he moves. 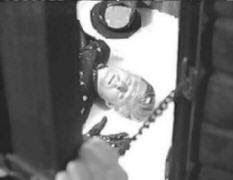 He pleads with her that his name is Harold Beldon and he needs a doctor and he doesn't understand why she wont help him. Wanda say's that she doesn't have a telephone. "I can't unlock the door...You can't ask me to do that, I know who you are!" she cries.
"You're not going to help me?" he says as she begins to shut the door, "You're going to let me die? I don't understand!...it HURTS! it HURTS!" he begs, struggling for breath with every word. Wanda is obviously torn. She is afraid to open the door but she can't let this young man die. She sobs quietly, "It isn't fair, It isn't fair!" as she carefully slides the chain lock open. 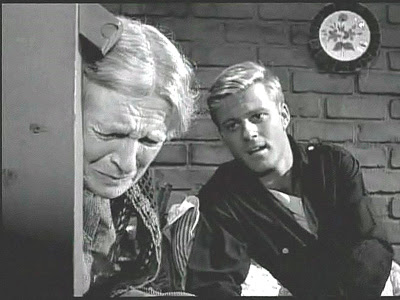 She carefully reaches out to Officer Beldon and is shocked and surprised when she touches him and comes to the realization that she still lives.
With renewed vigor she struggles to help him rise and guides him inside. Some time has passed and we find that Wanda has nursed mr. Beldon enough that he feels much better.  She hums happily to herself while she prepares Tea for him and busies herself with setting it up. Harold says "Now listen, you should try and get some rest. Really, I feel much better. When the Doctor gets here, he can take me off your hands." Wanda casts her eyes down ashamedly. "You didn't call the Doctor?" he asks her, and she shakes her head like a little child caught in the act of a bad deed. "Why not?" Harold asks. "I haven't got a telephone." She tells him.  She goes on to explain that there are no neighbors either and that they've all moved away, "Trucks came and took away their furniture, first one and then another." She justifies her reason for not finding a telephone with the fact that she couldn't take the chance and let the Doctor in anyhow, because "He might be Him..." Officer Beldon questions this and she explains that she has been in this tenement house for years, never going outside because she believes that "Mr. Death" is waiting for her.  He is trying to get in.  "He's clever." she says. "He knows I'm on to him."  He comes as a different person all of the time.  She tells Harold that a long time ago she saw an old woman knitting on the bus in front of her. A young man got on the bus too and the old woman seemed upset with his presence. She dropped her yarn and their fingers touched when he picked it up and held it out to her, the young man got out at the next stop. By the time the bus reached the end of the line, the old woman was dead.  She goes on to tell Harold that she has seen Mr Death since, several times. " Every time I knew someone who died, he was there. Once he was a young soldier, a salesman, a taxi driver..."  Officer Beldon tries to reason with her and tells her she shouldn't live like this. Wanda says "If I don't live like this, I wont live at all."
While they sit together Wanda talks to him about her life. Gladys plays such a perfect part during this scene especially. She says "I'm old, but I don't want to die. I'd rather live in the dark than not live at all." tears glisten in her eyes and my heart swells up to huge size.
Suddenly the demolition man comes to the door and Harold talks wanda through her fear of opening it. She opens it and she is so overcome by her fear of him that she faints.
Finally Wanda awakens with the gentle coaxing of the Demolition man. He tells her he is going to demolish the tenement and that she has to leave. She tells him she cant go. He explains that the place is falling apart so badly that he is surprised it still stands.  He feels sad for her but can't help that it is his job. He says that if she isn't gone when he comes back to do the job, he will get the police.

She suddenly realizes that Officer Beldon IS a police officer. "Explain to him, tell him the reason I can't go out there." she asks Harold who doesn't answer. The Demolition man asks her what she is doing. "Mr. Beldon is a police officer" she says, but demolition man isn't phased and leaves her with the warning that she better get her stuff and leave.
Now Wanda knows what has happened. "YOU...!" she says. "He looked right at you and didn't see you!!"she cries. Harold tells her to look in the mirror. Wanda sees that he is not reflected in the mirror. "You tricked me!" she says angrily.  Now this is my all time favorite scene of just about any movie, television show, play....ever. Harold explains to Wanda that he didn't come to hurt her. "Am I really so bad, so frightening? You've talked to me, you confide in me. Have I tried to hurt you?" he asks her. "I had to get you to understand". He stands up and takes a gentle step towards her. "It isn't me you're afraid of. You understand me. what you're afraid of is the unknown." Wanda looks frightened but harold is prepared for this. "Don't be afraid." he tells her, holding his hand up. "But I am afraid!" Wanda answers. "The running is over." Harold tells her and looks at her firmly yet with understanding in his eyes . "It's time to rest." He smiles at her and extends his open hand to her. "Give me your hand." he tells her and here is where my eyes actually start to well up and I get the lump in my throat. "But I don't want to die!" Wanda cries, her tired face showing all of the years of fear in the lines. "Trust me." the young man whom we now know is Mr. Death says gently to her. Wanda shakes her head and swallows hard. "NO....No!"she walks backwards, away from him. Now the part comes where I go from tears welling up and a lump in my throat to tears spilling over and a wracked sob escaping my lips; "Mother....give me your hand." he says, nodding at her and reaching out. (tears are flowing down my cheeks by this point) Wanda reaches out and carefully places her tiny, wrinkled, old hand into his which he gently folds around hers.  He smiles at her kindly. There, you see!" he tells her. "No shock, no engulfment, no tearing asunder...what you feared would come like an explosion is like a whisper, what you thought was the end...the beginning." Wanda looks at him with wonder in her eyes. "When will it happen?" she says. "When will we go?"  "Go?" He answers. "Look." he tells her and motions toward her bed.

Wanda sees her body lying dead yet peacefully on the mattress. "We've already begun." he tells her when she looks up at him. Now he leads her out the door and lovingly offers her his arm which she takes and they walk together into the beyond.
Posted by 50sme at 2:39 AM