I've talked earlier about a project I've been working on over the past, well....forever! anyway, I am finally done with it. Not completely done as I still need to laquer the darn thing but done with the big part. This was really pretty danged fun and it kept me seriously occupied. I so enjoyed this that I plan on doing lots more and making special ones for friends and who knows, maybe I'll do a giveaway or something like that here.

I had a boring wooden stool just hanging around the house and I thought it would look pretty cool decoupaged up. I cut a trillion vintage ads, fonts, images, etc. out of a handful of the TONS of vintage 1950's and early 60's magazines I have and started pasting. I figured it would be really simple but in reality you can't just slap stuff on there. You have to make sure things fit together right and all that. (BTW; the photo date mode on the camera is not set properly. These images were taken today 2-15-2010) 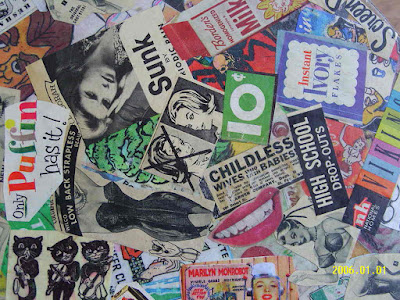 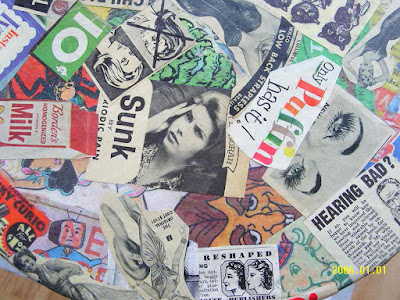 "almost" every single image is cut out from vintage magazines, there are a handful of images that I downloaded and printed out from a couple of Flikr photostreams that I follow, namely from Wackystuff and Neatocoolville, whom always have killer images that I couldn't help but use. 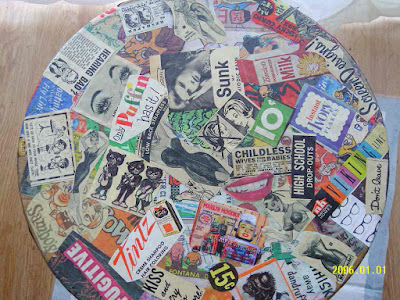 I would think I was getting closer to being done with this thing and then there would be just a few more spots to cover, just a few more spots to get and then more would show up. it's surprising just how much surface there actually is to cover on a basic wooden stool. I had to get each leg, the support pegs, etc. I was determined that every single bit of exposed surface would be covered. 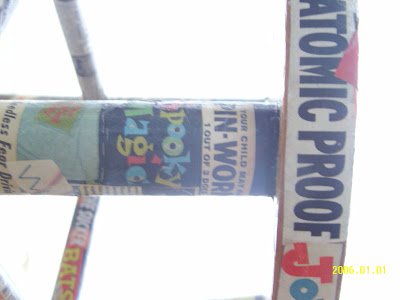 I got several comments on it while it was under construction. It really is neat and you can't help but get drawn in to the images and stuff. There is a lot of wording and stuff too. TONS of small print and little secrets tucked in here and there. I saw some really neat decoupaged stuff here on some great blogs. One really cool thing I saw was some absolutely KILLER travel cases/suitcases all done in like vintage illustrations...I think one had like Little Red Riding Hood and the Three Little Pigs, etc. on it and I can't remember the other one, but they were SOOOOO cool. 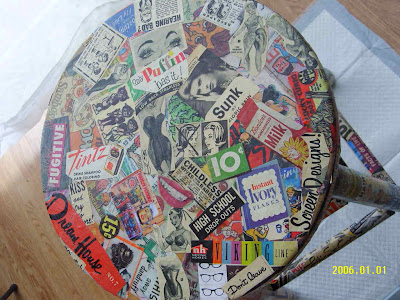 So anyhow, I figure NOT TOO BAD for a first shot at decoupaging anyway. I did do a decoupage years ago when I was a little kid. I think I was in like 5th grade or something like that. I did a cool turtle on a peice of wood and we did the burned edges and all that. I thought it was so neat. Anyway, I think I could do picture frames, boxes, tables even. I could even do themes! 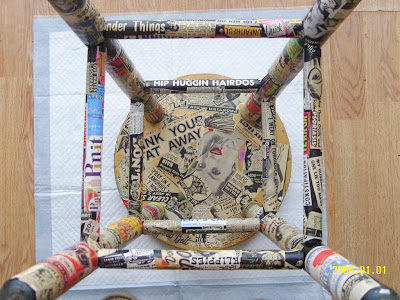 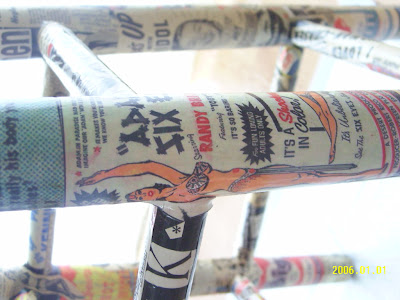 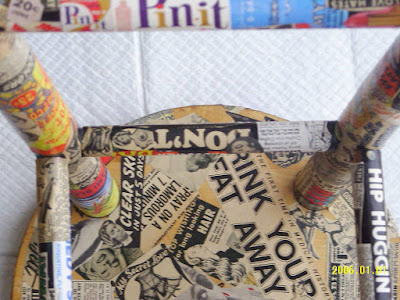 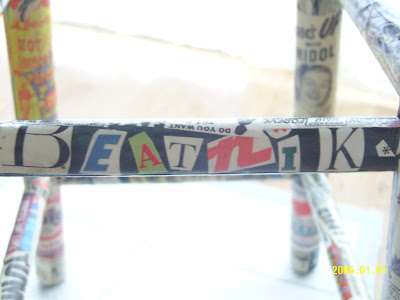 I don't want to inundate you with photos which, by the way, don't show nearly an inkling of the coolness that is this rocking decoupaged stool I crafted. Anyhoo...Finis.
Posted by 50sme at 5:17 PM