Note: The words I use are chosen from the Pocket Dictionary of American Slang. A popular abridgment of the finest dictionary of American Slang ever published. compiled by Harold Wentworth and Suart Berg Flexner. "contained here are definitions of almost all the slang words in common use today" The dictionary was published in 1960 and took ten years to compile. what you read here is copied word for word from the dictionary EXCEPT for the EXAMPLES and CLARIFICATIONS. Those are mine

Four Letter Man; A dumb or stupid man, usually a student. Some student use. The
four letters are "d-u-m-b."= dumb. See "Three Letter Man" for the derivation.

Three Letter Man; An effeminate man; specifically a Homosexual. The three letters are
"f-a-g"= fag. A pun on the collegiate term "Three Letter Man"= a student athlete. Reinforced by "three dollar bill". Some student use since c. 1935.


Three Dollar Bill; An odd or eccentric person; specifically a person who claims to
be what he is not or tries to assume the identity of another.
Because there is no such thing as a US three dollar bill. From the expression "As phony as a three dollar bill." -specifically a Homosexual; a sexual pervert. (also: The Third Sex; Homosexuals. Now the only common meaning.) 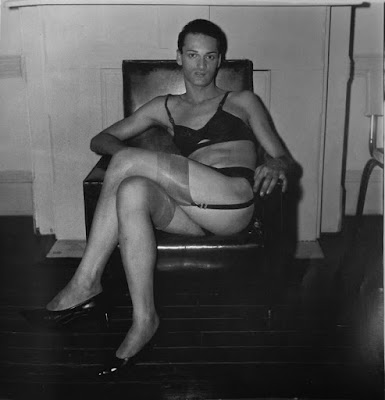 image by Diane Arbus "Seated Man in Bra and Stockings"
Example:
Hey Joey, Waddya tink of dat Tony? What a Nancy, Huh? gives me the heebies! At first I was tinkin he was just a kook an' all dat but Willie, he tole me Tony's da real ting, a tree letter man! Can you beleedat? A tree letter man right here in our buildin'Joey, right here in our buildin'!

Clarification:
Hello Joseph. I was wondering, what is your opinion on Anthony? I have come to the conclusion that he is highly effeminate. I get an uncomfortable feeling of nervousness when I am near Anthony. Initially I reasoned that Anthony was merely eccentric but William plainly informed me that Anthony is in fact a Homosexual! Can you accept this  Joseph? We are actually cohabiting in the same rental property as a Homosexual!
Posted by 50sme at 9:09 PM