Rumble: n. 1. A complaint to the police. Information or knowledge of a crime or criminal supplied to the police. underworld use-2. Police interruption or interference in an illegal activity or before a crime is completed. An arrest. underworld use- 3. A fight or battle, usually pre arranged between rival street gangs. orig. teenage street gang use now fairly well known, especially in large cities. v.i. To create a disturbance in order to distract attention from confederates while they are commiting a crime or escaping. v.t. To see, notice, recognize, report, scare or frustrate someone in an attempted robbery. some underworld use since c. 1925 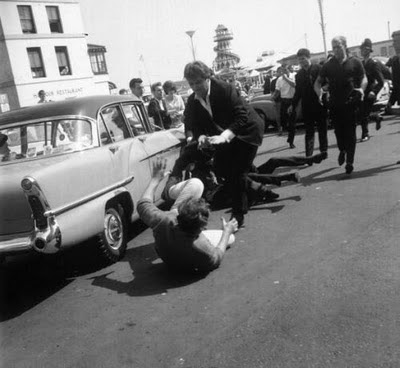 image from Photograph of the Day

Example: "Moe, Jocko, Tony! The rumble's on at the quarry. Paulie says no bricks; sticks. We gotta move, fast!"

Clarification: "Moses, Jackson, Anthony! The battle we have pre arranged is scheduled to happen at this very moment at the rock quarry. Paul has suggested that there will be no bricks allowed but that sticks of all shapes and sizes are acceptable. To get there on time we must move quickly!"
Posted by 50sme at 2:35 AM