The 1950's american slang word of the day today is:


Sausage: n. 1. An inferior athlete, especially one with rippling muscles, as a prize fighter, weight lifter or wrestler. 2. A prize fighter, especially an inept prize fighter whos face is swollen, bruised or scarred from many severe beatings in the ring. 3. Any dull, stupid person. one who is as alert as a real sausage. 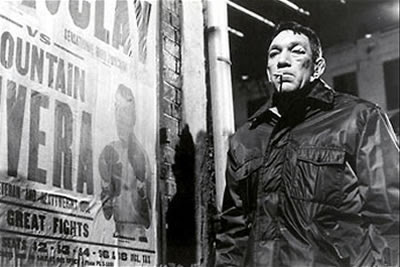 anthony quinn in requiem for a heavyweight 1962


Example: That Jimmy, what a sausage! I don't see how Irene can stand it. You'd think all those beatings he takes in the ring would knock some sense into him!


Clarification: That poor James, his face is so deformed that I tremble at the sight. I am unsure as to how his wife Irene endures such a situation. You would suppose that by now, considering all of the severe beatings he has sustained, he would have been taught not to be so silly.
Posted by 50sme at 10:18 PM