I've fallen behind drastically on my 1950's American slang posts so I'm going to post a couple of them today to make up for it.

1) Skate; v.i. To avoid paying, to evade a creditor, the image is of a person who "skates away", reinforced by 'Cheap Skate'. n. 1. An inferior, decrepit or useless horse. Ranch, farm and some racing use. 2. A contemptible person. since c. 1890. From "Cheap-Skate". 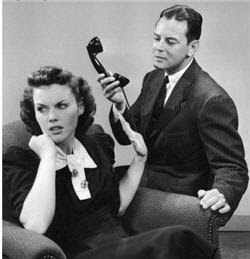 Example: Harlan just skates off into the horizon every time he sees Sal coming up the sidewalk with the meat bill. He sticks poor Mary Lou with it every time. I loaned her the dough to pay and this time I'm taking it out of Harlan's hide!

Clarification: Harlan disappears from the immediate area every time he notices the Butcher is coming to collect on the meat bill. He leaves Mary Lou to face the shame and humiliation of being unable to pay all by herself. I loaned her the money to pay the bill and this time I plan on bludgeoning Harlan with a knobby club until he begs for mercy and learns his lesson.

Sizzle; v.i. To die in the electric chair; to fry. -r. n. 1. lit. and fig., anything that is or anyone who is hot or "hot" in any of their usages; anything that is or anyone who is hot, fast, exciting, sexually stimulating or stolen. 2. specif. a hard blow with a fist; a knockout, a punch. c. 1920 prize fight use. 3. specif. in Baseball; a fast, hard-hit, low line drive. 4. specif. an exciting, vivacious, sexually tempting woman. 5. specif. a Burlesque dancer or stripper. 6. specif. a sensational or lurid story or scandal. 7. specif. a funny joke, usually one about sex. 8. any extremely popular song, book or movie; or extremely popular entertainer, successful athlete or the like. 9. specif., an expensive item of stolen goods, a stolen car; a kidnaped person. 10. An inferior cook; especially a logging camp or ranch cook.  Sizzling; adj., "hot" in any of its usages. Stolen, paid as a kidnaping ransom. 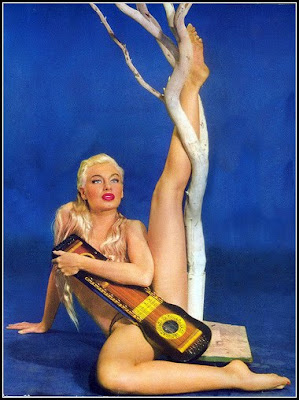 Lili St. Cyr, aka "The Anatomic Bomb" image from Love The Gals' Flikr photostream
Example: Hey, Willie! Rollo and me went to the Blue Belle Saturday night. Have you seen that new hot tamale they've got dancing over there? OOOOoooooooEEEEeeeeeee she makes that stage sizzle man!! She is hot!

Clarification: Hello, Willard. Roland and I visited the drinking and entertainment establishment known as the Blue Belle on Saturday night. Have you been lucky enough to witness the exciting dance performance of their highly attractive new female employee? I'll be darned if she doesn't stimulate me sexually with her extremely provacative dance moves. She is one fine woman.
Posted by 50sme at 2:49 PM