French Walk: 1.= Bums Rush, the. 2. Specifically ejecting a man from a place forcibly by grabbing the seat of his pants with one hand and the back of his collar with the other, thus forcing him to walk until he reaches the door. 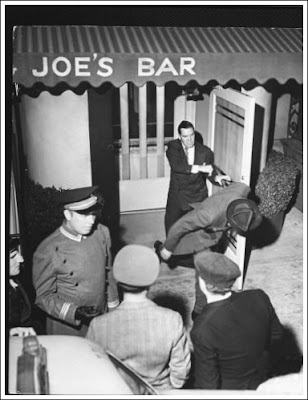 Example: "Did you hear? Paulie got the french walk right outta Pops Bar last night! He was six sheets to the wind. He's sleeping in the doghouse tonight!"

Clarification: "I wonder if you've been made aware of the latest news involving our friend Paul? The staff had Paul forcibly ejected from the Pops drinking establishment last night. He was highly intoxicated. I'm sure that his wife is quite upset by it and is punishing him wholeheartedly."
Posted by 50sme at 10:23 PM