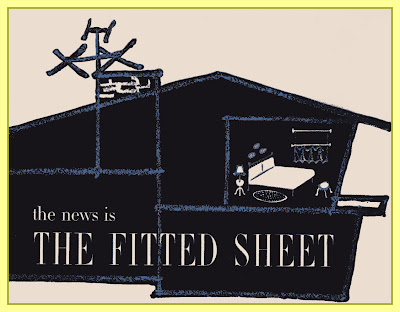 At this years white sales you'll find increasing quanities of the fitted sheet, that marvelous new comer. The fitted sheet, you know, is shaped more or less like a box top except that the mitered corners are curved slightly so that they fit around the corners of the mattress and tuck under them.

Properly fitted, such a sheet conforms perfectly to the shape of the mattress, remains beautifully smooth al night long, (even withstanding tossing and turning) and makes bed making so much easier. These fitted sheets are used as bottom sheets with either a regular or a half-fitted (just one end has mitered corners) top sheet. 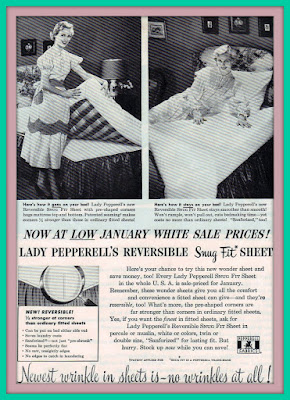 "Sanforized" for a snug, lasting fit

"Just remember to say "Arrow" at the shirt counter and you'll say "wonderful" at your ironing board!" 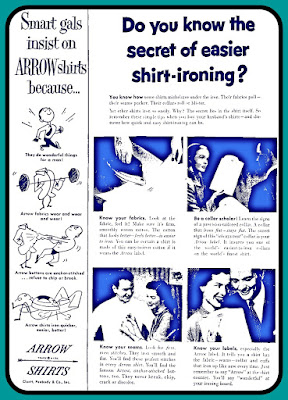 
"In 1825, the detachable shirt collar was invented by a Troy, New York housewife, Hannah Lord Montague, who was looking for an easier way to keep her husband's shirts looking fresh without having to launder them everyday. The idea caught on, and Troy was soon a center of collar manufacturing. Among the companies making collars was Maullin & Blanchard, a small business that started production in 1851. The company eventually became known as Cluett, Peabody and Co, and in 1885, the Arrow brand was born. Within a few years, they were the largest maker of collars in the world.


In 1905, the Arrow Company hired artist J.C. Leyendecker to develop a new image for their collars. He came up with the Arrow Collar Man, a handsome young man wearing the latest style of Arrow collar. This ad campaign that lasted over twenty years, and generated 1000s of fan letters from female fans.


By the middle of the 1920s, times were changing and men were dresing more casually. The days of the stiff detached collar were drawing to a close. The Arrow company decided to switch from collars to shirts. They advertised that in order to get an Arrow collar, one must get an Arrow shirt. In 1930, in an effort to find a fabric that did not shrink when washed, Sanford Cluett, nephew of the founders of the company, developed a process the company named Sanforizing. They ended up licensing this process to hundreds of other companies.


In the 1930s, as Americans turned increasingly to sportswear, Arrow began making sports shirts with open collars and straight cut hems. This trend was interrupted by World War II, when the company made military uniforms, but when the War ended, they expanded their sportswear selections, including slacks and shorts, casual jackets and beachwear. They also continued to make shirts for the businessman, including the new button-down collar. "