2. Skid Road; skidroad: n. a street of district of a town containing employment agencies, eating places, gambling rooms and brothels such as cater to or are frequented by loggers, seasonal and migratory workers and the like: the cheap business street or section of a town. orig. logger use; hobo and underworld use since c.1915. 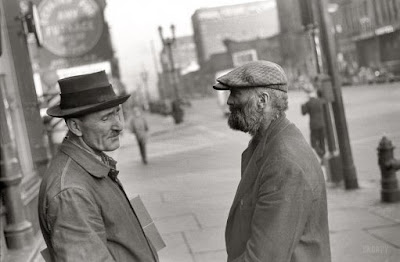 Example:
I aint seen Pete for a time. I hear'd he turned tail and hit the road hopin' he might find some kinda work in California. Today a man is Scrabblin' for anything, diggin for a penny here, a penny there...hopin' for a miracle and findin' skid road instead.

Clarification:
I haven't seen Pete around for quite a while. I heard that he gathered up his belongings and went on foot searching for employment in California. In this day and age a man is struggling for possession of a thing of any kind. Trying to earn an honest living any where he can find it. Believing that what he prays for might be had but instead ending up on a dilapidated street begging for a drink with a large group of degenerates.
Posted by 50sme at 8:42 AM